¤
☁ Mob may be spawned by an egg or command, followed by a countdown giving players time to participate.
Once the countdown ends nearby players are added to the tournament, and are distributed into even spaces around the central orbital.

⚛ Orbitals spawn in front of each participant, the game then beings. The first round is a test round.
The second round onwards has a target to beat, and players must surpass an amount of clicks to be promoted.
The target clicks and round length is easily configurable, as well as the increments the target clicks increases in, specific rounds can also be modified.

✻ Each players CPS is displayed as they jitter click throughout the round, CPS action bar can refresh up to 20 times a second. Once the round ends, each participants unique Average CPS and Total Clicks are displayed to them. The player who has achieved the most clicks is displayed dynamically, showing their name, skin, and achieved number of clicks.

* preview video
* Rotating player model requires Lib's Disguises & ProtocolLib
* blockwave effect disabled by default
* Initiation length has been shortened to 15 seconds for this video
* CPS works independently from the Average CPS
* works in mostly all terrain
* currently does not work on 1.19 servers 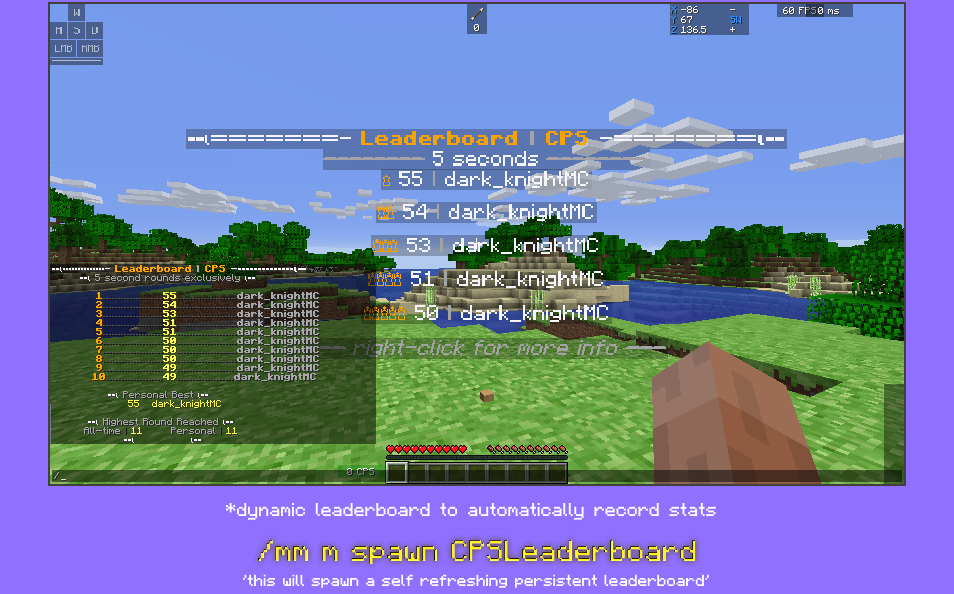 This resource includes many versatile functions and demonstrates the near limitless capabilities mythicmobs offers. Using only signaling mobs and skills to create a mini-game that looks like it is a standalone plugin.

| on a 4GB localhost run on an HP laptop.
Let me know as soon as you find a bug/issue here so I can work on fixing it.
Reactions: tupac

Join the discussion Get support